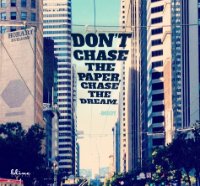 The quote is by Sean Combs (P. Diddy, Puff Daddy) to Christopher George Latore Wallace, better known by his stage name The Notorious B.I.G, in the movie “Notorious.”

I had a project, that was getting a lot of press.  I had spent tons of my time working on drumming up the hype and chasing the money and I lost sight of the dream. A mentor of mine has told me repeatedly over the years, and so I reminded myself (and sharing the quote with you): “Set a date and move forward. The money will come. It always comes.”

I took this advice on my first feature, and she was right. It all worked out. People saw my dream unfolding an wanted to be a part of it. It worked on my second feature too. Somewhere between then and now, even with the other feature films I have produced, I forgot her advice and have spent too much time chasing the paper.

Don’t get me wrong. The job of the producer, or at least one big job, is to raise the capital to make sure that the dream can be realized, but more than that it is to create the passion and drive the team forward in spite of all the business headaches with which you are dealing. Always remember:

We are the music makers,
And we are the dreamers of dreams,
Wandering by lone sea-breakers,
And sitting by desolate streams;
World-losers and world-forsakers,
On whom the pale moon gleams:
Yet we are the movers and shakers
Of the world for ever, it seems.

So here’s to the movers and shakers, the dreamers of dreams, the writers, film makers, and creatives making things happen. Get out there and chase the dream. Let others see your passion and your successes will follow.